This is the home page for the Mathematics Department at Saint Michael's College.

These tell you about our people and our programs.

This stuff applies to our department as a whole.

We took our annual trip to the Hudson River Undergraduate Mathematics Research Conference, held this spring at Mount Holyoke College. Here is a group photo. If we didn't have the largest group it must have been close! (Click on the thumbnailed picture for the full size version.) 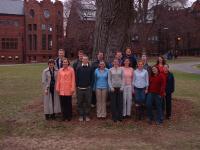 For more information, you may want to check out...

If you have a question about the program, about courses, about anything, please feel free to contact the department chair.
Math page maintainer
Math Department, Saint Michael's College
Colchester, VT USA