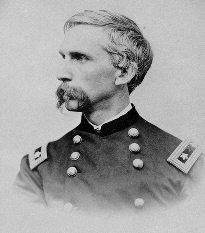 The Game of the Name

This site is named in honor of the hero of the American Civil War, Joshua Lawrence Chamberlain.

He was, as a young man, at Bowdoin, a small New England religious-affiliated liberal arts college. That put him in the church the Sunday that Harriet Beecher Stowe had her vision of the slave escape that forms the ending of Uncle Tom's Cabin.

Later, in the time of national crisis that came, he left his position there of professor of logic, and left his wife and two children, and rose, by sheer courage, to help save the Union left at Little Round Top on the second day at Gettysburg. He went on, despite grave wounds, to become a general. He had Lee's flag of truce at Appomattox pass through his lines, and in fact, was the general chosen by Grant to accept the formal surrender of the Army of Northern Virginia. (Did I mention that he came home to single-handedly stave off an armed uprising and become governor of that state, and then retired to to become president of his college? Well, he did.) Hey, he didn't walk on water or anything, but he was a neat guy.

If you are interested in reading more, a good place to start is the Pulitzer Prize winning Killer Angels about the action at Gettysburg. This is the book on which the movie Gettysburg was based.

(The picture is courtesy of the Maine State Archives.)